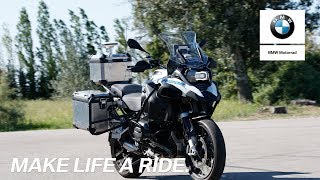 TWO WHEELS. ZERO DRIVERS. Self-driving cars and trucks might get all the attention, but they aren’t the only vehicles letting AI take the wheel. On Tuesday September 11, BMW released a video (below) of its self-driving motorcycle in action. In it, the driverless motorcycle starts its engine and then takes off down a track. It accelerates and makes turns all on its own before returning to a complete stop. The best part: the tech powering the motorcycle could one day keep biker

One year after the U.S. House of Representatives passed the bipartisan SELF DRIVE Act, House Energy and Commerce Committee leaders called on the Senate to advance automated vehicle legislation. “After a year of delays, forcing automakers and innovators to develop in a state-by-state patchwork of rules, the Senate must act to support this critical safety innovation and secure America’s place as a global leader in technology,” a media release from the House committee states.

In this installment of the Innovation of the Month series, we explore how the FedEx Institute of Technology at the University of Memphis, in partnership with the city of Memphis, has developed a methodology for predicting connected autonomous vehicle adoption. MetroLab’s Executive Director Ben Levine discussed the project with Sabya Mishra, co-director of the SMARTCities Research Cluster at the University of Memphis, and Memphis CIO Mike Rodriguez. Ben Levine: Your project fo

Busy travelers don’t love waiting at the airport for flights that might or might not be on time. But they don’t love sitting in traffic either, regardless of who’s driving. As long as gridlock is an issue, will autonomous cars really change the travel game that much? — Hannah Sampson Volvo Cars is taking aim at the aviation industry, saying self-driving vehicles could eliminate the need for some short-haul flights. The Gothenburg, Sweden-based carmaker on Wednesday unveiled a

Rolling robots, in test mode in Arlington, could be coming to Dallas sidewalks

A rolling robot may be coming to a Dallas sidewalk near you. Dallas officials are considering whether to green-light a pilot of autonomous delivery devices. The robots, which are powered by an electric battery, could deliver groceries, takeout, medicine or other items to customers' doorsteps. If it gets the City Council's blessing at a meeting later this month, the rolling robots could be deployed as early as November. Delivery robots have become an appealing alternative for

TESLA'S MODEL S sedan, the car company’s flagship vehicle, was first shown as a prototype in 2009, has been on sale since 2012, and, barring one small change to remove the fake grille at the front, has looked exactly the same for nearly a decade. This is notable because most manufacturers fully redesign their cars every four to six years to keep them fresh—and to keep buyers buying. For Tesla, tech upgrades are the selling point. The company pushes software updates several ti

The timeline is to have the shuttles tested without passengers toward the end of 2018 Self-driving shuttles are expected to ferry passengers in the downtown streets of Columbus, Ohio, by the end of the year. The Ohio Department of Transportation, the city of Columbus and Ohio State University (OSU) are seeking proposals from companies to operate and maintain low-speed, self-driving shuttle service around the downtown riverfront area known as the Scioto Mile. It will be the fi

The rise of autonomous and smart connected vehicles on our highways has put a spotlight on the instances of auto cybercrime, and the relevance of suitable regulations in the industry. FreightWaves recently discussed the impact of these regulations on civil liability in detail, and as a continuation to that segment, spoke with David Barzilai, the Executive Chairman of Karamba Security, an Israeli company that focuses on securing automotive controllers from hackers via its soft

By fall, a 12-month pilot program with Cap Metro could have six driverless shuttles bustling around downtown Austin. (TNS) — Downtown Austin, Texas, could see pod-like driverless shuttles by the end of the year under a pilot program Capital Metro is considering. The agency, according to a presentation to be given to the Capital Metro board Monday afternoon, foresees having a fleet of six electric, autonomous shuttles running a route between the MetroRail station on East Fourt
1
2345
bottom of page